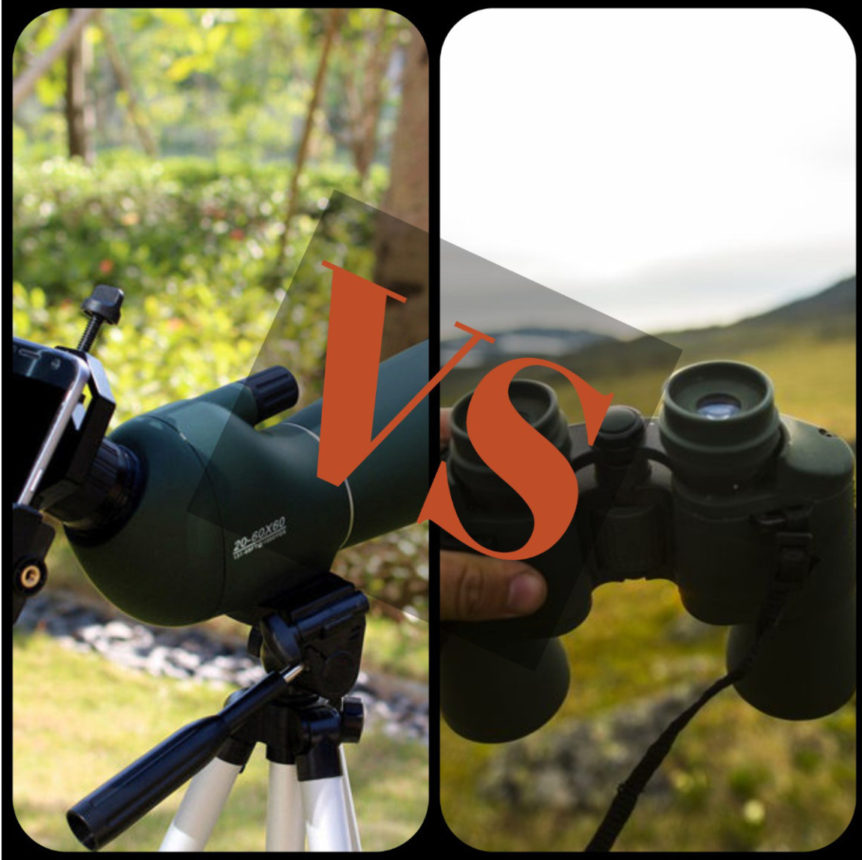 I love nature, and started taking note of my natural surroundings at a relatively young age. That’s when I began to notice the plethora of different species of plants and animals, and how they related to each other. It naturally followed that I would need some type of visual magnification, especially for the observation of the members of the Animal Kingdom.

Fast forward thirty years (give or take a few), and my love for natural observation has only grown deeper. Fortunately, my pockets are also deeper than when I was a starry-eyed eight year old.

As hobbies go, birdwatching doesn’t take a huge investment. However, if there is one item that is worth spending a little extra on, it’s your optics. That’s what we will be discussing here. 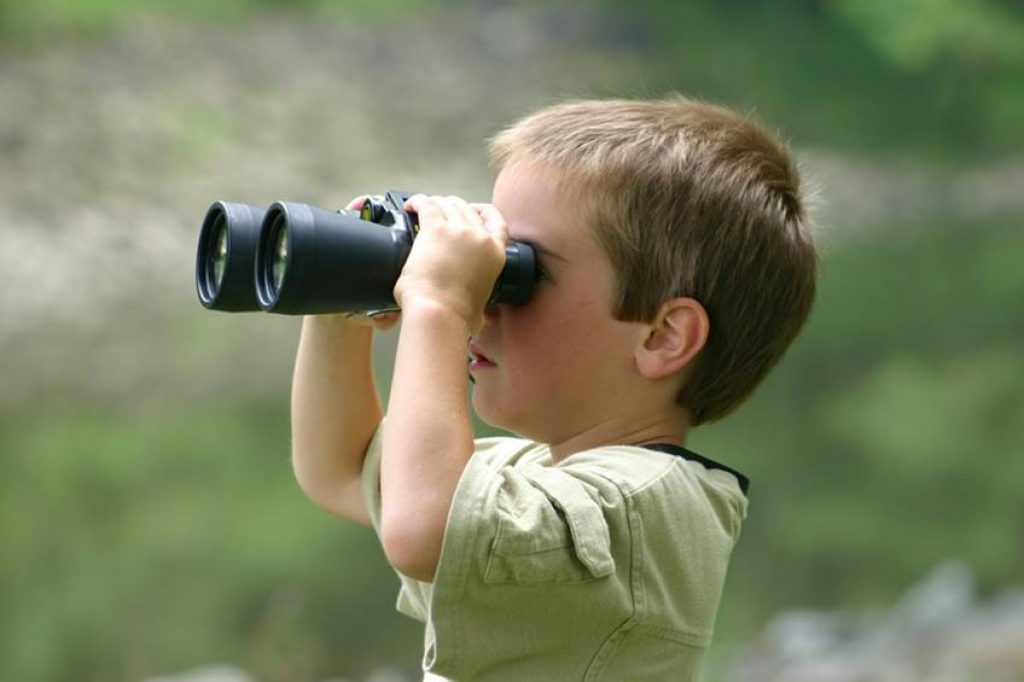 When I started bird watching, there was really only one choice that fell into my range of availability. I was able to pick up a cheap pair of binoculars. They were much better than toys, but far from quality optics. When I was lucky, my dad would let me use his binoculars, and as you might imagine, I could immediately tell a huge difference in the way they felt and performed. I knew then that I needed better binoculars.

These days are a bit different, as my choices and access to those choices have vastly expanded. The price range for optics is still pretty wide, and I won’t get into the quality difference other than to say, generally in this field, you get what you pay for. The key is to find what works for you in your particular circumstances.

The Question: Should I Buy Binoculars Or a Spotting Scope For Bird Watching? 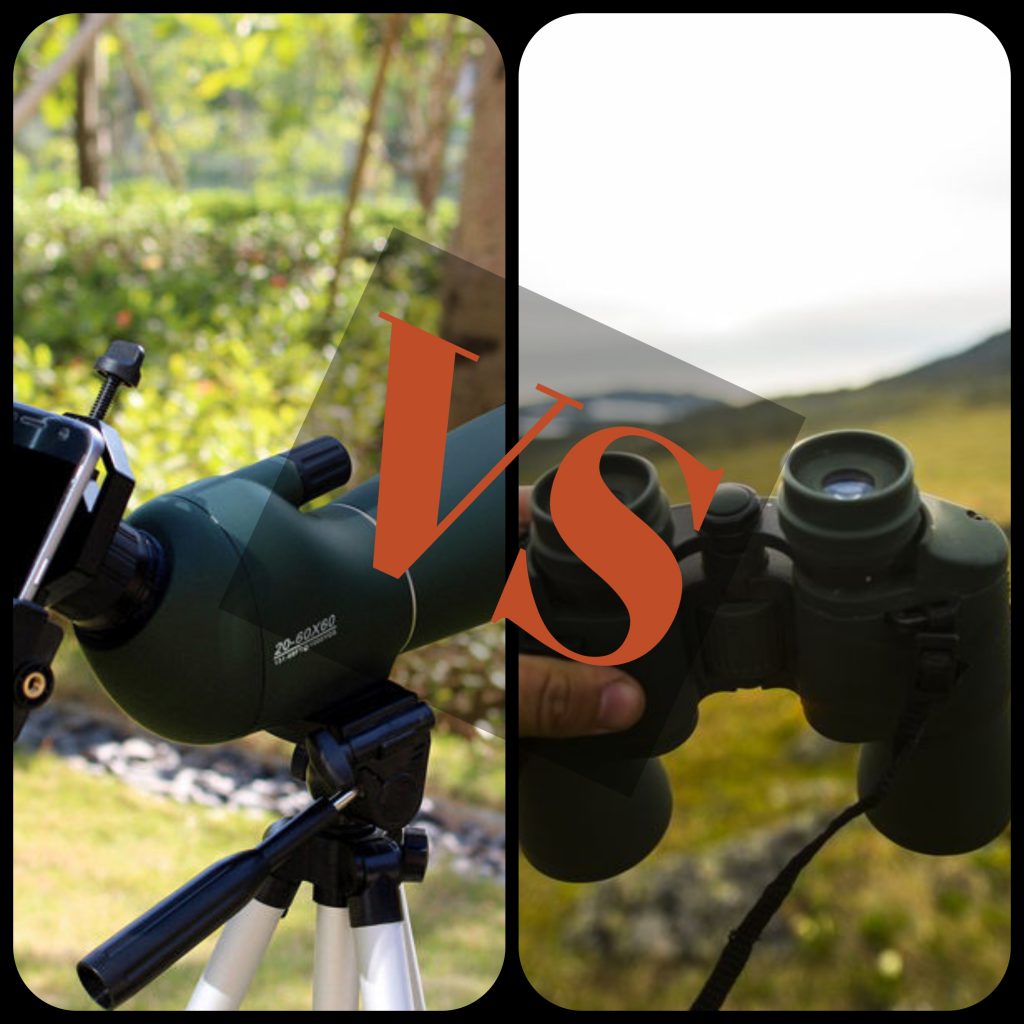 Now to the debate about whether to purchase a spotting scope or binoculars. We will take a look at the pros and cons of each, comparing them along the way. That gives you the chance to understand how each type works, and what is going to work best for you. That, after all, is the most important thing to consider.

Read on for my explanation for why binoculars are the better overall choice for bird watching:

First things first, let’s just take price out of the equation. There are bargains in both categories, and some choices that are completely cost prohibitive to the layperson. That done, we can really look at what both products offer, and make our judgements from those facts alone. This will provide a level playing field for us to compare the pros and cons without delving into the issue of cost.

The first thing that comes up for me when birding is weight and ease of transport. In my opinion, binoculars take this category hands down. Here’s why: Even heavy binoculars can hang reasonably comfortably around your neck. By their very nature, they are built to be symmetrical. This means that when they are hanging around your neck, the weight is going to be even on both sides. Add in a comfortable strap, and you’d be surprised how much weight you can carry and still be comfortable. The combination of weight balance and carrying ease puts binoculars firmly ahead in this round.

Next up we will look at the actual optical improvement. All other things being equal, the scope takes this round. Most binoculars, even the best pairs, are only providing about 12x to 15x magnification. Scopes, on the other hand, generally start at about 20x and will adjust to around 60x. Even the scopes that I would consider to be very cost prohibitive for the average birdwatcher have the same magnification rating as some of the more affordable scopes. The raw power of the spotting scope wins the day for magnification.

The caveat of the previous paragraph was “all things being equal”. We all know that the rest of the factors aren’t equal, otherwise there would be no discussion about which was a better asset, and no reason for me to write about it in this piece. Taking basic usability into consideration, I have to again side with the tried and true binocular. Having the tool at the ready, hanging at low-chest level, is an absolute must if you are trying to catch the bird on a limb before it flutters off.

A quick grab and intuitive raise to the eyes, and you are generally on target with your binoculars. Using a scope isn’t so simple. Being monocular creates the situation in which we, as humans, aren’t used to by having to use just one eye. We use both eyes for a huge number of reasons, one of the major of which is the judgement of distance. Once we put eyes on our target animal, it is easy to adjust binoculars to the right initial power and focus to obtain a reasonably good image. With a scope, we find ourselves looking up and then back through the monocular to make the adjustments we need. Both may take a practice initially, but it is much easier to learn with the binoculars.

The scope needs to be placed on a stationary platform in order to even begin to be used effectively, and the additional magnification factor is going to also magnify any movement of the scope itself. This makes for a very unstable image if there is any movement to the scope whatsoever. The binoculars on the other hand, are much easier to put on target and, even at maximum magnification, keep on target. That being said, if you do happen to have a stationary subject of observation such as an eagle or owl’s nest the scope is in a much better position to offer truly superior views.

If this piece sounds like a promotional for binoculars, it truly wasn’t meant to be that way. The fact is though that, at least for the casual birdwatcher trying to up their game, a binocular is just a better choice. I know I said we weren’t going to touch on price, but at this point I think it will just drive the point home a bit more. A mid-range pair of binoculars will set you back around $400, whereas a mid-range monocular will cost you around $1200. If that doesn’t put the final nail in the coffin of the spotting scope, I don’t know what will.

Optics Empire is a participant in the Amazon Services LLC Associates Program, an affiliate advertising program designed to provide a means for sites to earn advertising fees by advertising and linking to amazon.com.