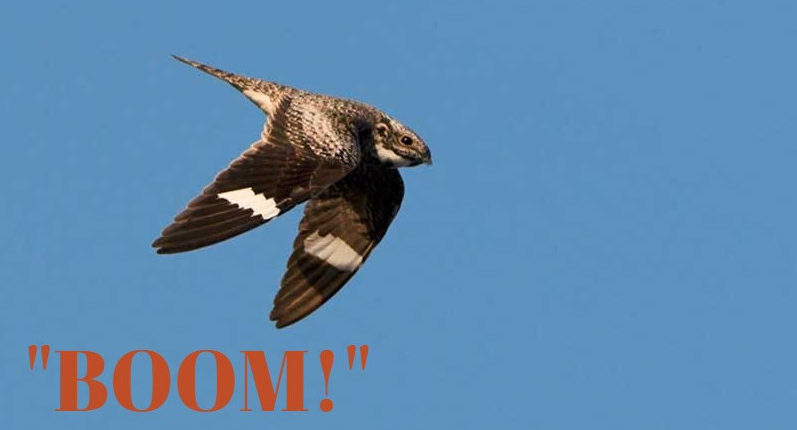 What was that noise? There it goes again! Is someone beating on a plastic trash can lid?

I am often asked, “Do you know what makes this sound?”. Then the person asking the question starts to hoot, cluck, chirp, or squeak. I try to pick up the cadence of the sounds and run through the usual suspects. Then, we stand across from each other, squawking and chirping much to the delight of passers-by… Sometimes, the sound they ask me about is very clear and only one bird can be the culprit. They’ll say, “Hey, I heard the sound of a rhythmic boom.”, and then I say, “Oh, that’s the sound of the mating courtship of the common nighthawk!”.

Before I Explain Their Boom… An Overview of Nighthawks

Nighthawks isn’t just a famous modernist painting by Edward Hopper. It is also the name given to birds within the Caprimulgidae family. Known as the nightjar family, it includes the common pauraque, the eastern whip-poor-will, and chuck-will’s-widow. All uniquely sounding birds, but the booming sound of the mating common nighthawk is something to behold.

Nighthawks and Their Mating “Boom” Noise

Common nighthawk, Chordeiles minor, or bull-bats are most active from half an hour before sunset until an hour after sunset, and again starting an hour before sunrise. They are referred to as bull-bats due to the bat like nature of their flying. During their courtship the male nighthawk will hover making a “peent” sound. Then the male bird dives through the air towards the ground, creating a booming sound when air rushes under its wings. The sound can be heard following this link: (https://www.allaboutbirds.org/guide/Common_Nighthawk/sounds)

The male will eventually land, flashing and wiggling his tail at his female. The male nighthawk also puffs out his throat, displaying a white patch. He then makes croaking sounds to impress his mate. After mating, the female lays around two eggs. The incubation period lasts about 19 days, and the female will adjust her position on the egg to make sure the sun’s rays stay on her back. The chicks are fed by both the male and female through the regurgitation of insects. The chicks will take flight when they are around 21 days old.

Common nighthawks are mostly found out in the open country but can also be seen flying around in cities and suburbs. Their nesting sites are at ground level but they’re not the common physical nest you’d expect. The bird’s eggs lay on the surface of the soil or rock and can sometimes be found on top of stumps. The gravel rooftops of  apartments and businesses are a popular spot for the nighthawks but unfortunately, these rooftops are being used more often due to urban sprawl and agriculture.

Nighthawks Keep Booming Audibly, but Their Population Is Doing the Opposite; Declining

The common nighthawk’s range covers most of the United States and Canada. There are an estimated 16 million nighthawks alive but the species is in steep decline. A study done in South Dakota found an increasing number of nighthawks only using rooftop nesting sites because the specie’s usual nesting sites of open grasslands and riparian environments have been destroyed by row-crop agriculture. Global climate change has increased humidity and lessened wind speed and cloud cover on the rooftops, causing a high temperature situation not suitable for nighthawk eggs.

A 2013 study conducted for a nesting population in Pennsylvania found a 71% decline and the North American Breeding Survey saw a 61% decline from 1966 to 2014. The reduced numbers can be blamed on the use of new rooftop materials or the lack of new factory roofs but most signs point to the use of insecticides in both the breeding and wintering grounds of the birds. The birds are strict insectivores and the use of insecticides limit the dietary intake of the nighthawks. Read the article discussing Pennsylvania research here: (https://ebird.org/pa/news/decline-of-the-bullbat-aba-bird-of-the-year/).

What was that sound? It made a “peent”, then I heard a rhythmic boom! This is a question I hope to hear for many years to come. The common nighthawk population reduction caused by climate change, loss of habitat, and the use of insecticides is shared with many other birds. But, the nighthawk’s frequent urban habitation use make it unique and their courtship behaviors create a strange encounter. It would be a tragic future to attribute the booming sounds to something else other than the bat-like common nighthawk…