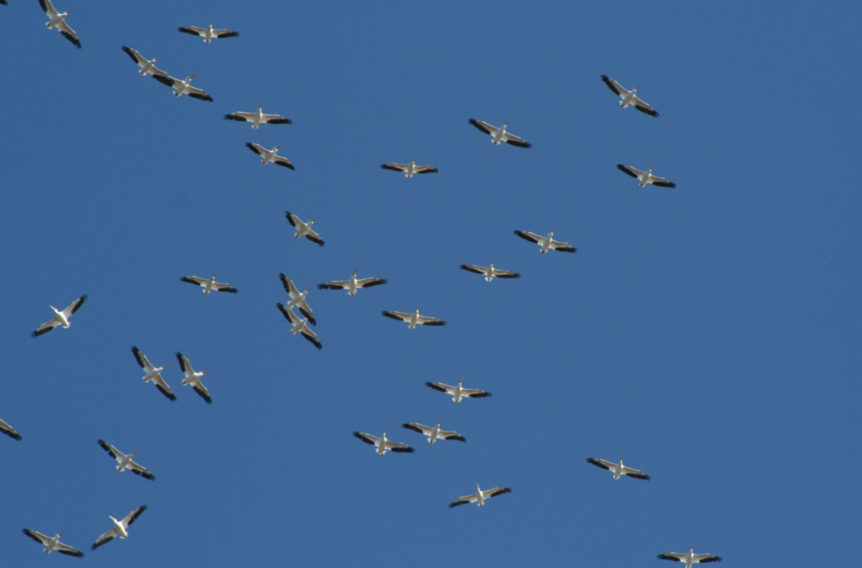 Welcome to our article about North American migration flyways! We’ll get into specific routes a bit further below, but first, an introduction.

There are many routes that migratory birds follow, and although some of them are pretty simple, some of them are extremely complicated and hard to trace. Many things contribute to that diversity, including differences in flight speed, time of starting, geographical position, distance travelled, the latitude of the breeding and wintering grounds, and other factors. Geographically grouped species with an almost continental distribution may travel different routes, so no two species follow the same path from beginning to end.

Bird migration is mostly a north and south movement, with the more concentrated lanes along the mountain ranges, coasts, and principal river valleys. For the most part, the main routes of migration do closely follow these formations, as long as they are in the direction of the birds’ travel.

The terms “migration route” and “flyway” represent theoretical concepts to some extent, but the latter has gained an official meaning to it. Migration routes may be described as the lanes of individual travel from the breeding grounds to the winter grounds of the birds that fly them. Flyways, on the other hand, may well be thought of as those broader areas in which related migration routes are grouped in a definite geographic region.

There are four major North American flyways. They have been named the Pacific, the Central, the Mississippi, and the Atlantic Flyways. The flyway boundaries are not always sharply defined, except along the coasts. Grounds in the northern breeding areas and the southern wintering areas are more or less overlapping. As a matter of fact, all four flyways merge into one in the Panama area. 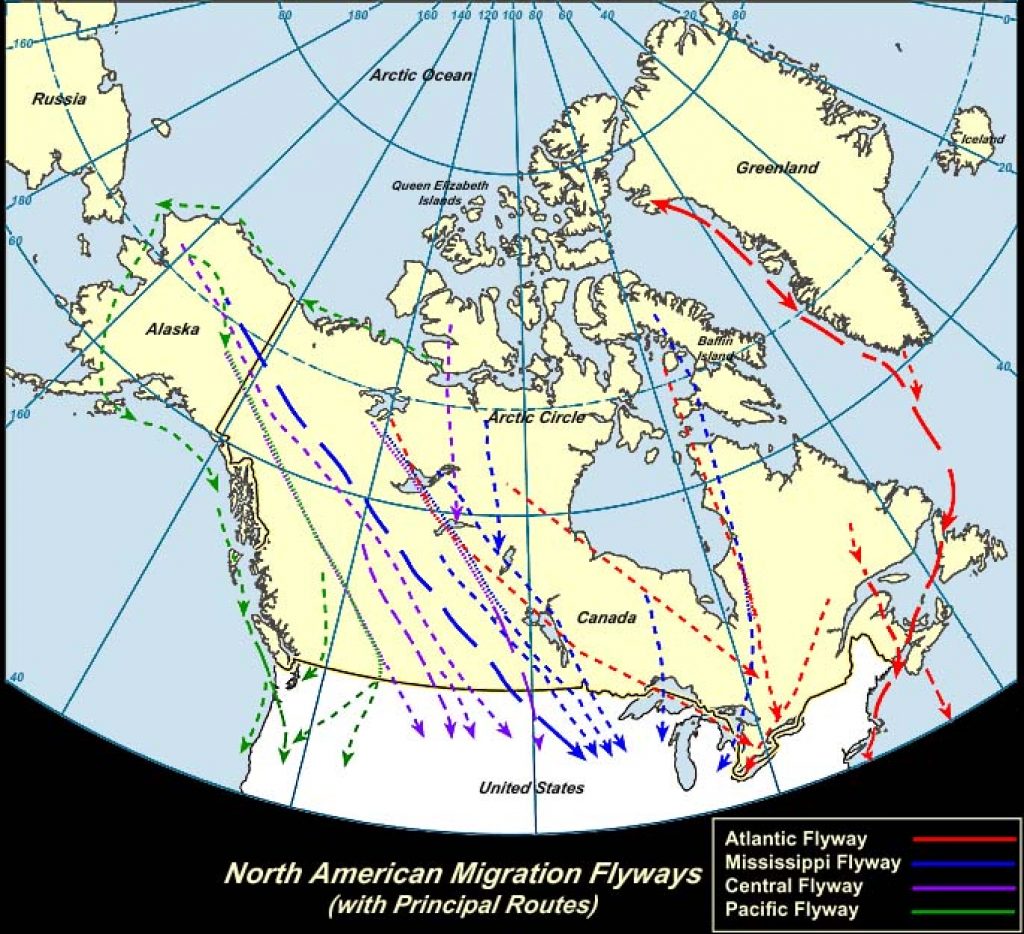 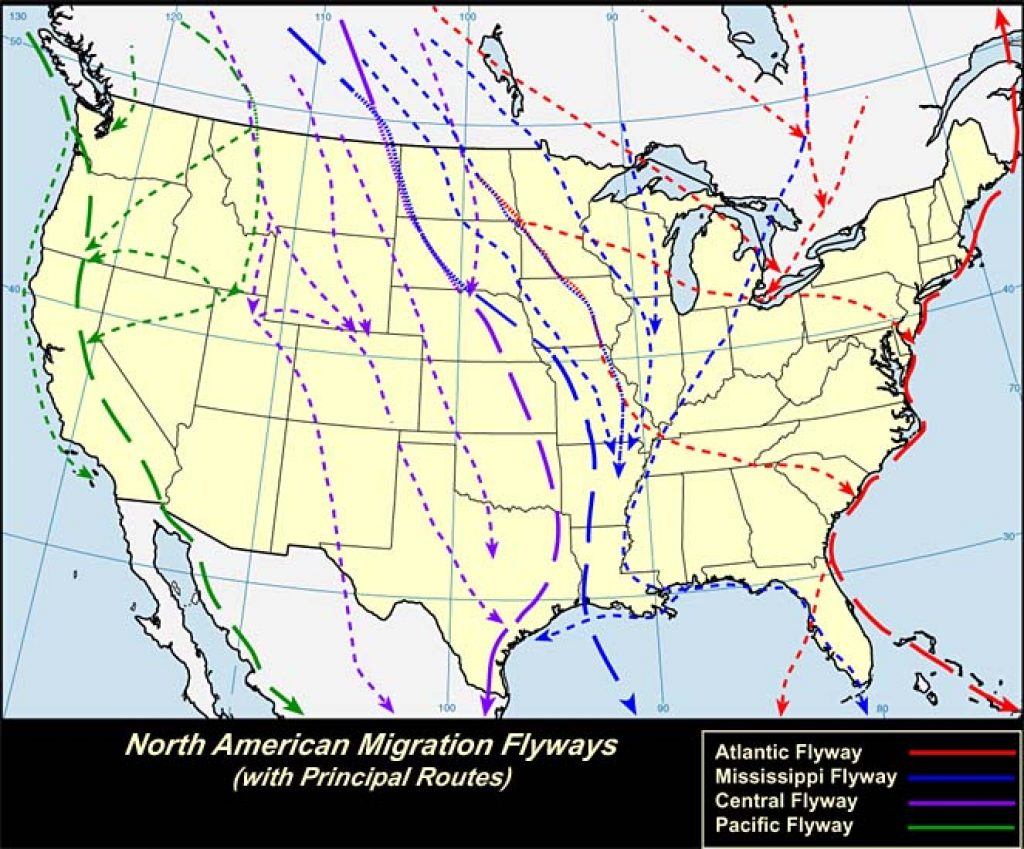 The Pacific Flyway extends from Alaska to Central and South America, where it combines with other flyways.

The Pacific Flyway consists of many notable migration routes. The coastal route, used by gulls, ducks, and other water birds, of the Pacific Flyway may be one of the most accurately defined Arctic routes in North America. The large delta region of Alaska’s Yukon River is a breeding ground for many species of waterfowl, and this area is the northern end of the route for some of those that use the coastal route for most of their migratory flights.

The longest route of the Pacific Flyway starts in northeastern Alaska and stretches through the interior instead of along the coast. The route apparently parallels the eastern foothills of the Rocky Mountains. Near the U.S.-Canada border, the route branches. Here, the larger flights continue southeast into the Mississippi and Central flyways, while the others fly southwest over northwestern Montana and Idaho’s panhandle. From here they pass over a small section of southeast Washington and go across Oregon to reach the interior valleys of California. California hosts suitable winter quarters for birds, which are found from Sacramento Valley to Salton Sea, and also in the tidal wetlands near San Francisco Bay.

As for the birds in the Pacific Flyway that leave the U.S. during winter migration, they pass through California’s interior to the mouth of the Colorado River, and from there on to the winter quarters in western Mexico. 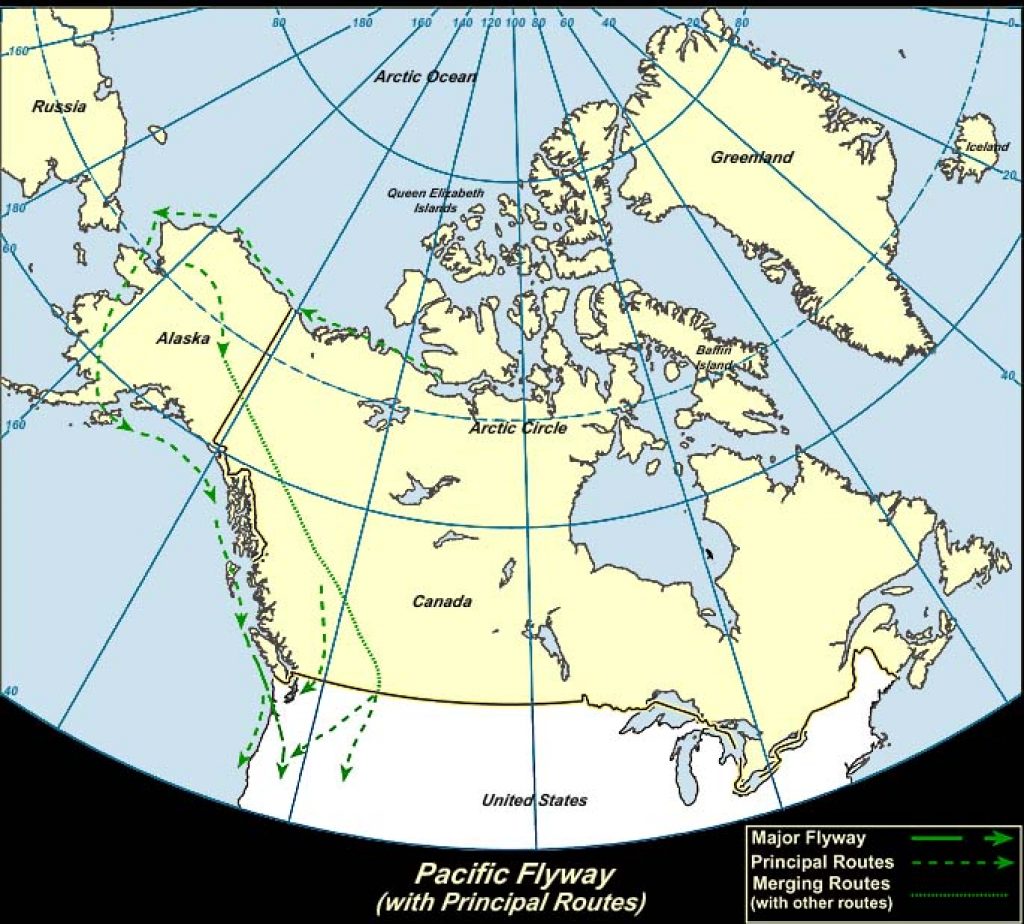 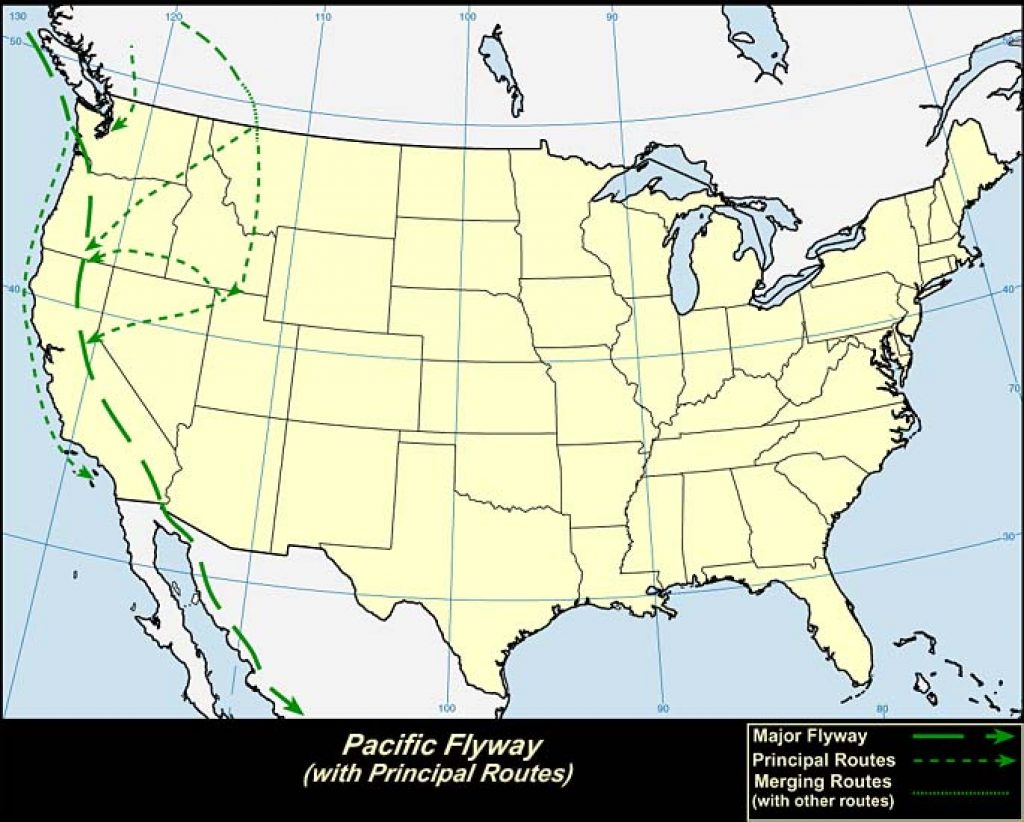 In the northern United States, the Central Flyway merges toward the east with the Mississippi Flyway and is pushed even more towards the east by the Missouri River. On its southern part, it goes through western Arkansas, Louisiana, and eastern Texas. From there it follows the Gulf of Mexico’s coast southward. On the northwest Arctic coast, where the Central Flyway begins, the western boundary closely follows the eastern side of the Rocky Mountains. In western Montana, however, the continental border is crossed and the route goes through the Great Salt Lake Valley and across the center of Mexico.

The Central Flyway is the flyway of the Great Plains, as it covers all of the region between the Mississippi River valley and the Rocky Mountains.

The Central Flyway is simple compared to other flyways since the majority of the birds that use it make obvious north and south travel from breeding grounds in the North to winter quarters in the South. 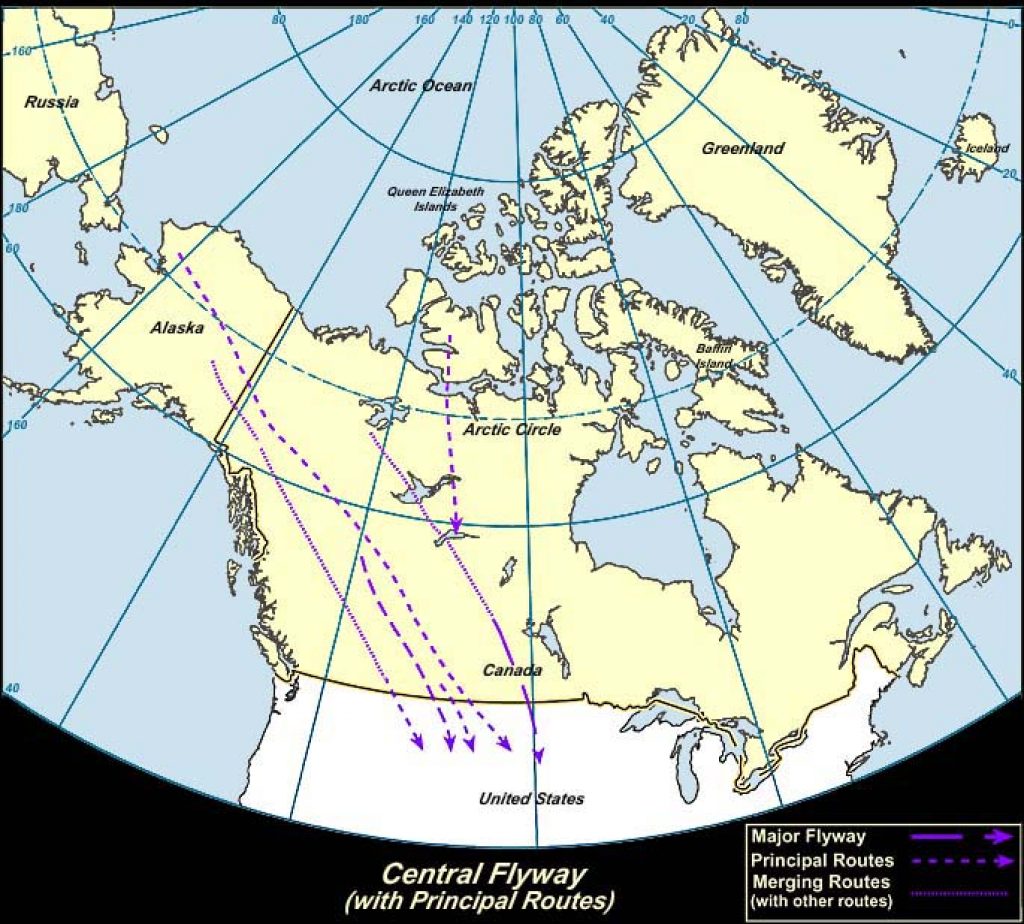 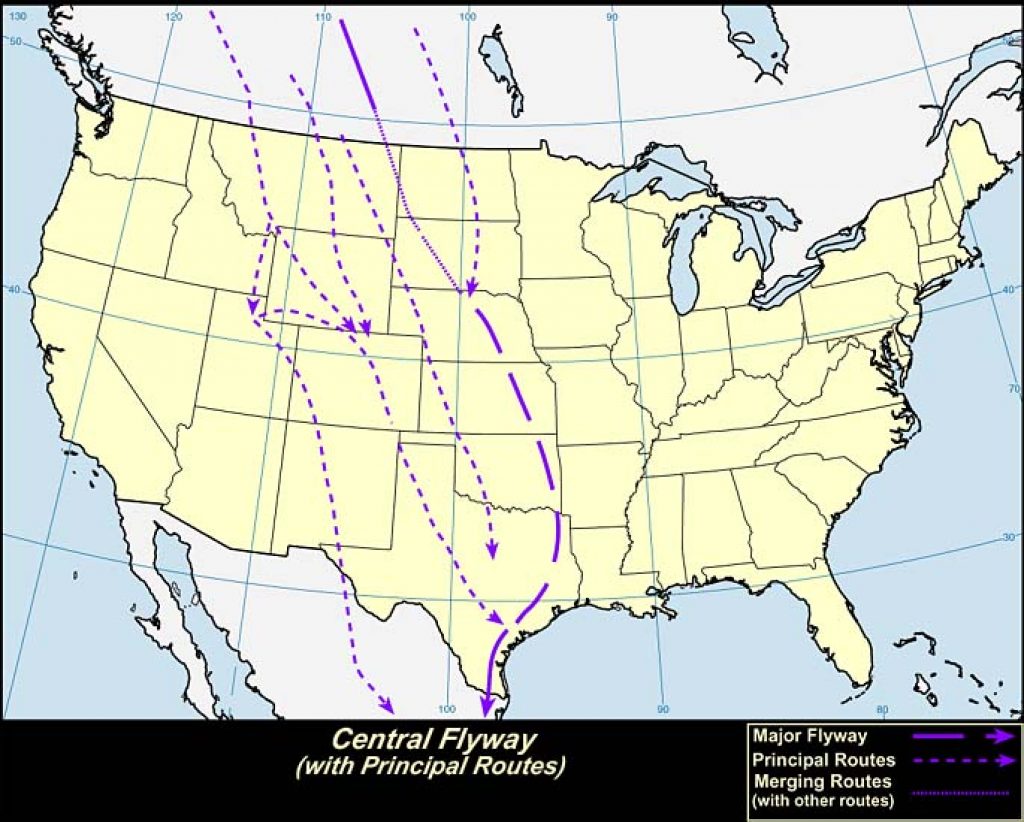 While this flyway is relatively simple it presents some features of interest, mainly surrounding the migratory waterfowl.

The flyway is well-defined on the east side, starting in eastern Canada and coming down through the western border of Kentucky, Tennessee, and Mississippi. On the other hand, the west side of the flyway is less defined, which is why you’ll see it overlapping the Central Flyway so often.

The longest migration route in the Western Hemisphere belongs to this flyway. It begins on the Arctic coast of Alaska and comes to its end in Patagonia, a region encompassing the southernmost tip of South America. During the spring migration some shorebirds travel this entire route and multiple species that breed north to Yukon and Alaska have to cover the larger part of the route twice a year. This route is uninterrupted by mountains or hills for more than 3000 miles. Since the entire region is well watered and timbered, it provides hosts of migrating birds their ideal conditions. The two rivers that it follows, the Mackenzie and the Mississippi, have a mostly north and south direction, another reason this route, which is used by large numbers of geese, ducks, shorebirds, sparrows, thrushes, warbler, and blackbirds, is so important.

The majority of North American land birds, looking for winter homes in the tropics, that migrate south in the Mississippi Flyway fly straight across the Gulf of Mexico instead of flying the longer, but much safer, land journey along the Antilles or Texas.

At one time, it was thought that most North American birds that migrate to Central America flew along Florida’s west coast, crossed the ocean to Cuba and then went across from the tip of Cuba to Yucatan. On the map it appears to be the most obvious route, but only a small amount of birds use it. 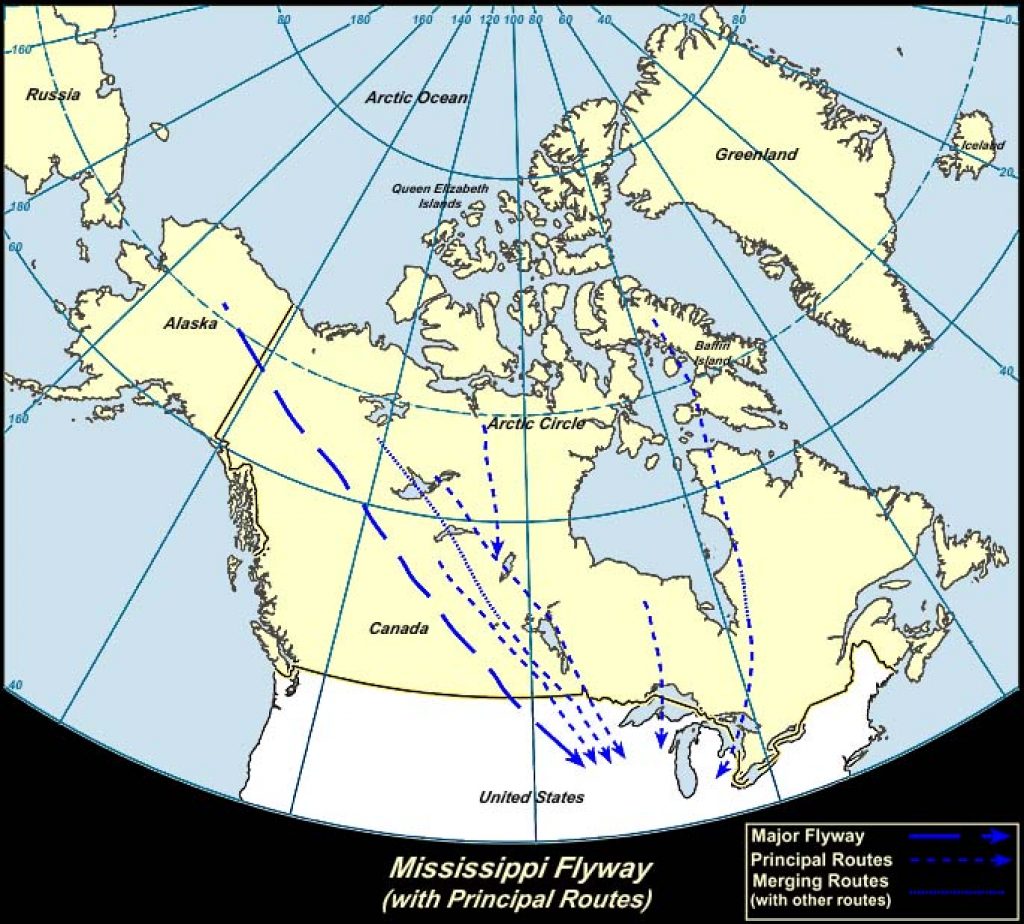 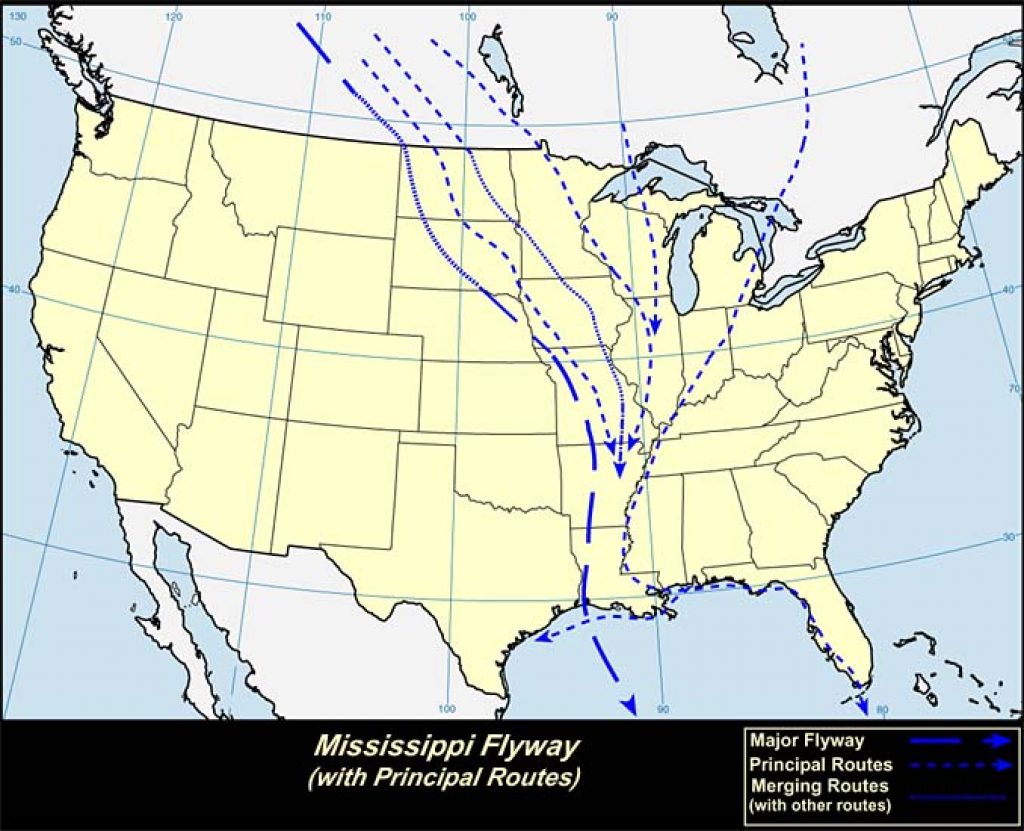 The route from the northwest is very important to waterfowl and birds such as Lesser Scaups, Canvasbacks, and Redheads that settle on waters and marshes south of Delaware Bay for winter. The Atlantic Flyway’s coastal route starts in the eastern Arctic islands and on Greenland’s coast. This is a common route, and there are many popular places for observing migrating birds along it.

One route of particular interest that is not shown in the images may be mentioned. This route passes over the Atlantic Ocean from the Nova Scotia area to the Lesser Antilles, and then to the mainland of South America. It is used by thousands of water birds and even by some species of shorebirds, but there are no reports of smaller birds using it. Since it goes over the sea, this route is known only as its beginning and ending points and from sightings in the Antilles and Bermuda.

Many of the birds that breed near the Allegheny Mountains fly southwestward for winter, maintaining this direction into Florida and crossing the Gulf of Mexico to eastern Mexico where the rest of their travel is over land.

Another route that consists of even longer flights goes straight across the Caribbean Sea, but despite that, it is most often used by land birds. After departing from Florida’s coast, the birds only have two landmasses where they can stop for food and rest before reaching their destination. More than 60 species make the 150-mile journey from Florida to Cuba. About half of the species remain in Cuba for the winter, while others fly an additional 90 miles from Cuba to Jamaica. There is a stretch of unbroken ocean for 500 miles from Jamaica to the South American coast, nevertheless about one-third of the migrant birds risk the hazards of this ocean trip. 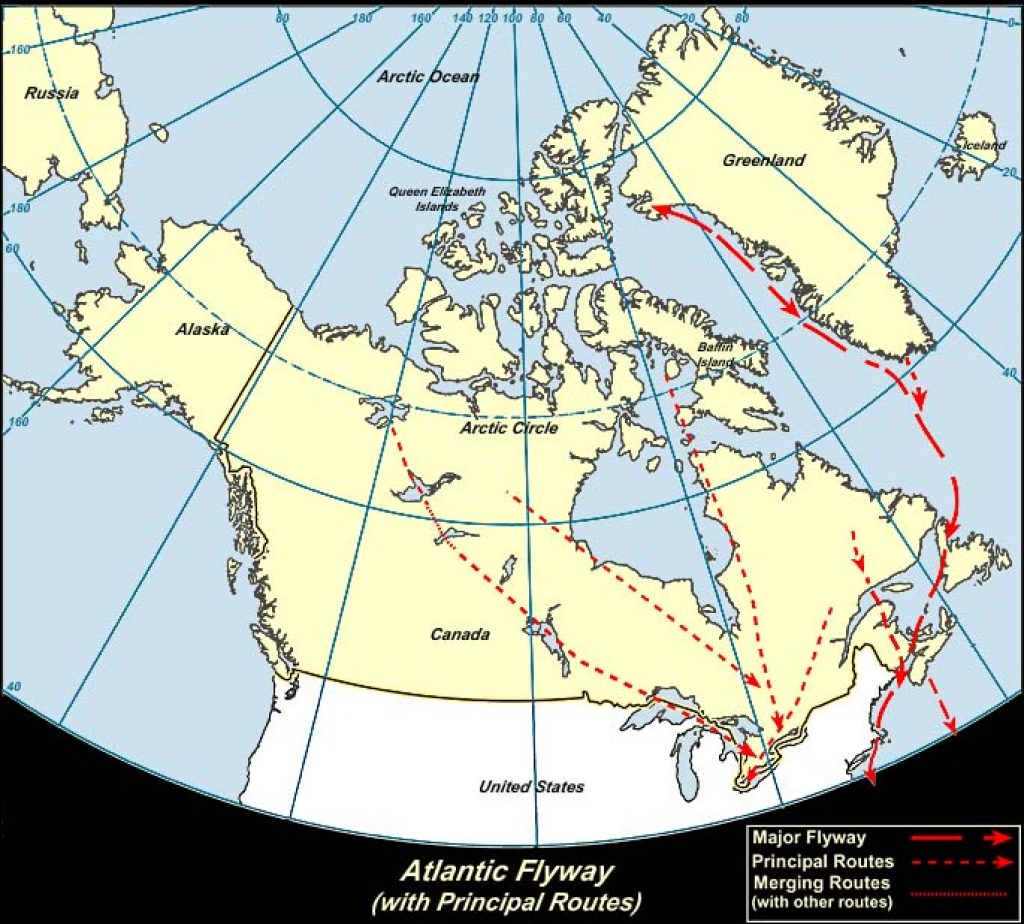 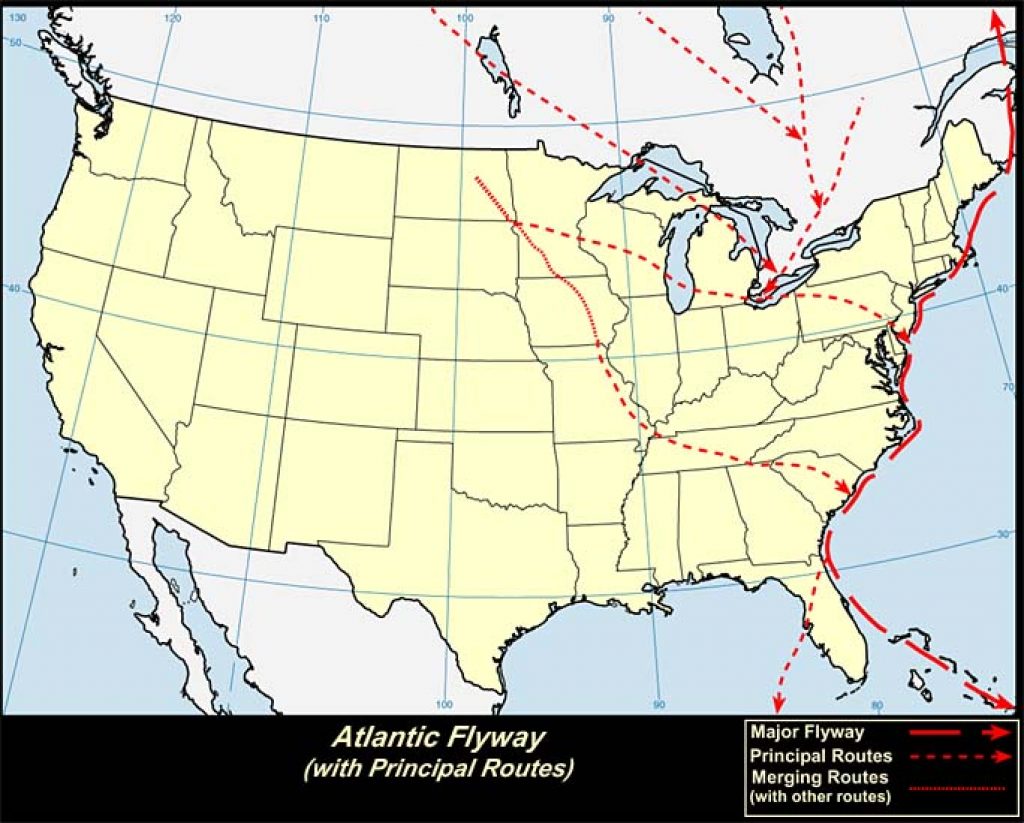