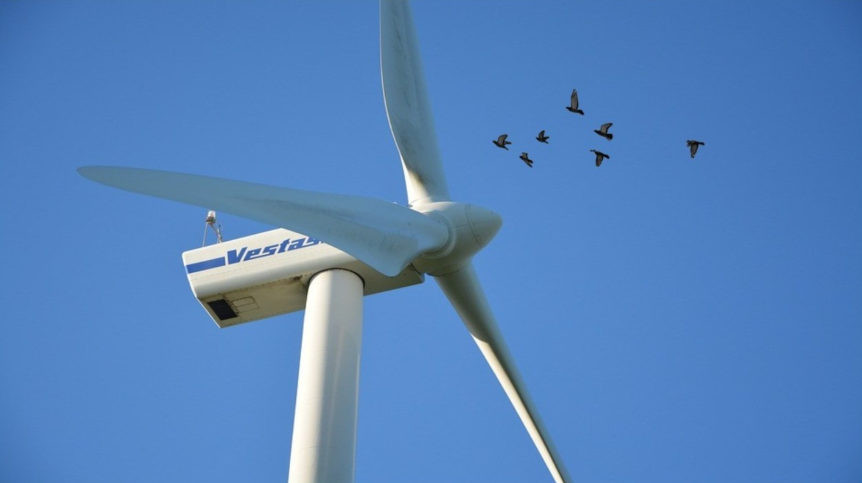 Wind power has the ability to be a green, bird-friendly form of power generation, but it can also adversely affect birds. In 2009, the U.S. Fish & Wildlife Service estimated that 440,000 birds per year were killed by U.S. wind turbines, and included this figure in the agency’s 2013 budget request to Congress. Birds can die in collisions with the turbine blades, towers, power lines, or related structures, and can also be impacted through habitat destruction from the siting of turbines, power lines, and access roads. Some birds, such as sage-grouse, are particularly sensitive to the presence of turbines, and can be scared away from their breeding grounds several miles away from a wind development.

Wind Turbine Deaths Compared to Other Sources of Deaths

Although many bird deaths are caused by wind turbines, many more are caused by collisions with power lines (25 million); communications towers, (6.5 million) windows (300 million); and cats (1.4 to 3.7 billion) plus the deaths due to pollution, habitat loss and climate change. (American Bird Conservancy) Even if there were twenty times more wind turbines, (enough to supply the US with electricty) the number of birds killed would be about 10 million–still much less than are killed by other sources.

While wind turbines might not be a major source of death, they are still concerning and the death toll will continue to grow as more and more turbines are built. Because of this, wind energy experts and organizations, such as the American Bird Conservancy, are working to reduce the deaths.

The mortalities being caused by wind turbines are concerning, but even more concerning for birds (and humans) is the environmental effects of oil, coal, and nuclear energy. Wind turbines should be made as bird-friendly as possible, but it is important to note that they are a much better option than the alternative.

Optics Empire is a participant in the Amazon Services LLC Associates Program, an affiliate advertising program designed to provide a means for sites to earn advertising fees by advertising and linking to amazon.com.